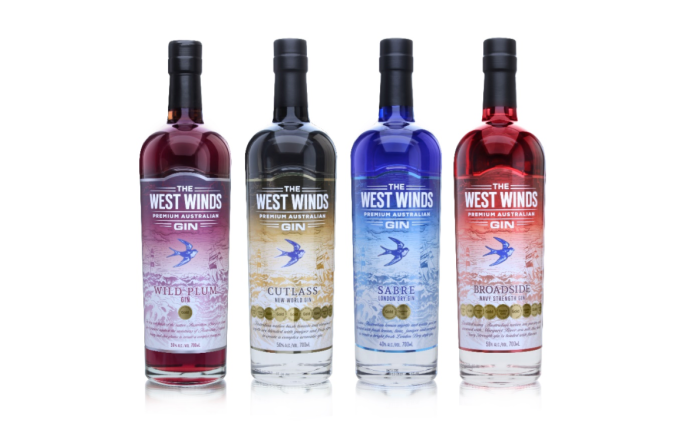 Australian gin brand The West Winds has unveiled a new design across its range of four gin types.

The new look, according to the company, gives each gin in the range (Sabre, Cutlass, Broadside and Wild Plum) its own distinct colour palate whilst uniting them under one strong, easy to identify, branded design.

This is a result of changes to its appearance to include a modern, translucent finish as well as a premium cork closure.

The design team at Flametree Creative worked closely with West Winds to create this range, while tasked with ensuring the new bottles still embraced the spirit of the company, with a nod to its coastal origins.

“We’ve wanted to refresh the look and feel of West Wind’s for a while now and we’re absolutely thrilled to see the results and all the core range of West Winds Gins lined up in their fresh packaging alongside the Wild Plum Gin,” The West Winds co-founder Paul White said.

Moving from a screw cap to cork, however, was a decision the team took after realising the spirits world wasn’t catching up with the wine industry’s easy acceptance of this closure.

“When we launched in 2011 we thought that the spirits industry would catchup with the wine industry in terms of acceptance of screw caps for premium products but this hasn’t really happened,” White said.

“We think the move to cork and the updated packaging reinforces the outstanding and internationally recognised quality of our gins.”

He added that while the new design has overhauled the look and feel of West Winds, giving it a more premium feel, the ergonomics of the bottle hasn’t been altered.

The company confirmed that the move is “just the beginning of the overhaul for West Winds”.

The rest of the range, including the pre-mix cans, is expected to fall into line with the new design by early next year.