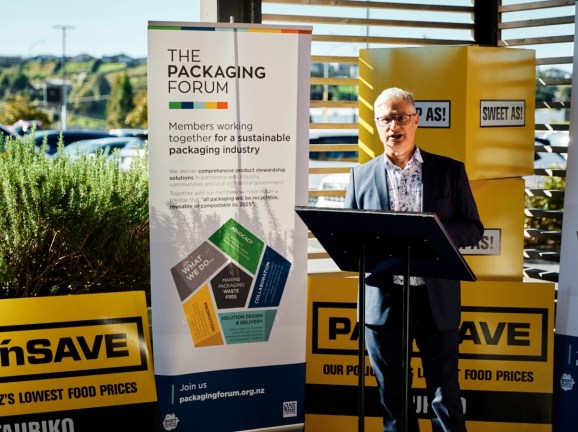 Tauranga residents in New Zealand can now recycle their soft plastic collections following the launch of the Soft Plastic Recycling Scheme in the region.

With 16 drop off locations across the region, Tauranga now has more places for recycling soft plastics per capita than any other city in the scheme – this equates to approximately one drop-off point per 10,000 people; compared to an average of 17,000 in other participating cities. It is estimated that the Tauranga region will divert approximately 43 tonnes of soft plastic per year from landfill to be recycled into fence posts and building products.

Todd Muller, MP for Bay of Plenty welcomed members of The Packaging Forum’s Soft Plastic Recycling Scheme, as well as local community and business leaders to the launch of the collection service at PAK’nSAVE Tauriko yesterday.

Muller told guests: “Our family decided we would separate soft plastics and really try, in our own small way, to make a difference, but it was just so hard to find a place to drop them off and kerbside recycling won’t accept soft plastics. Now, with this announcement, our family and many more like ours can and will make the effort – this is a great step forward for so many families in the Bay of Plenty.”

Packaging Forum CEO, Rob Langford says the Tauranga launch is significant given the number of collections points, and the fact residents have been asking for the service to commence in the region for several years. “As well as reaching a new milestone of more than 200 drop off locations around the country, we are pleased to add Bayfair as the first shopping centre to make soft plastic recycling available for its customers.”

“Last year despite service disruptions caused by COVID-19 lockdowns we collected over 330 tonnes of post-consumer soft plastics equivalent to 50 million bags or wrappers, which were all recycled here in New Zealand,” says Langford. “The scheme is a brilliant real example of how industry can voluntarily collaborate and succeed in its responsibility to deal with the end-of-life recovery for packaging.”

Jerome Wenzlick, Founder of Future Post says that the partnership with the Soft Plastics Recycling Scheme benefits everyone:

“Last year we made around 34,000 Future Posts from the soft plastic recycled through the scheme which is enough to fence the road from our Auckland plant to Tauranga,” says Wenzlick.

Jon Morrison is the owner of PAK’nSAVE Tauriko, which is part of the Foodstuffs co-operative. Morrison says sustainability leadership is a key part of Foodstuffs’ commitment to be here for New Zealand, and they’re proud to have so many of the co-op’s member stores involved in Tauranga’s soft plastic recycling scheme.

“Our local owners really get behind initiatives like this. We know our customers care about reducing waste to landfill and as a 100 per cent New Zealand owned co-op, we’re always looking for more ways to do our bit,” says Morrison. “Customers at PAK’nSAVE Tauriko have been asking for soft plastic recycling in store for some time, so we’re really stoked to be able to provide it for them now.”

Paul Vincent, Countdown’s Group Manager says: “My team and I are thrilled to be able to offer this service to our customers in the Bay of Plenty, giving them a way to recycle packaging that might otherwise end up in landfill. Countdowns, Bethlehem, Bureta Park, Fraser Cove, Tauranga and Papamoa, are excited to join over 100 other Countdown stores across the country offering soft plastic recycling and making it easier for our customers to be more sustainable.”