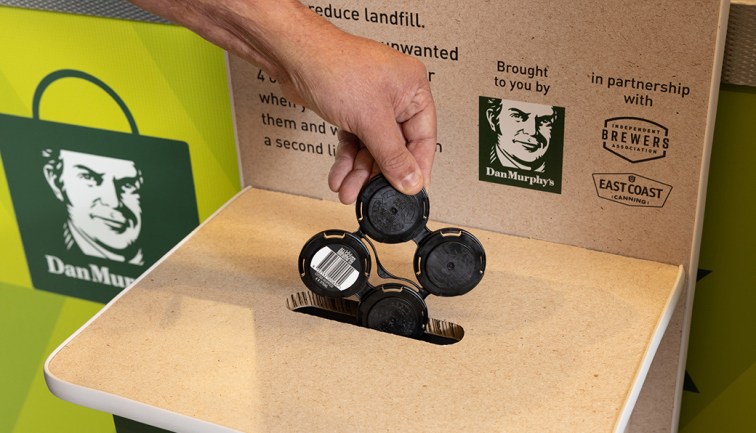 Australian retail drinks and hospitality business Endeavour Group has announced a new recycling initiative, becoming the first Australian retailer to develop a wide reaching circular scheme for the reuse and recycling of can clips.

In the new scheme, customers place used can clips in collection units in BWS and Dan Murphy’s stores, to then be picked up by local independent breweries or mobile canning company East Coast Canning for reuse.

The program was created through a partnership between Endeavour Group, the Independent Brewers Association (IBA), East Coast Canning, Visy Recycling and PakTech.

PakTech produces the can clips from 100 per cent recycled HDPE material already used and recycled by consumers in other products like milk bottles. Once the clips have been reused by brewers to the end of their lifespan, Visy Recycling then converts them into HDPE resin, which is then returned to PakTech to create more clips.

“Many beer lovers are familiar with the can clips that hold four and six packs of brews together, but many don’t realise that the clips are made of such sturdy material that they can be reused more than 50 times before being recycled and made into new clips,” Endeavour Group quality and sustainability manager Diarmaid O’Mordha said.

“Can clips are a great option for a circular economy, but there have been no multi-state recycling options available for customers where they can return the clips so many end up in landfill, which is why we have initiated this industry-wide reuse and recycling scheme.”

While the program has only launched in select stores now, Endeavour Group is planning to roll out the scheme in more stores later this financial year.