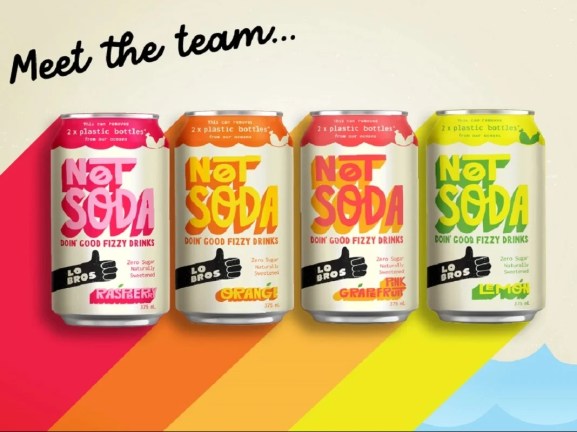 Lo Bros has launched Not Soda, a new impact-led range with a mission to clean up two million plastic bottles from the ocean by 2025.

Independent retailers Drakes and Ritchies have got behind the effort, with Not Soda to be sold in up to 130 of the two retailers’ stores across the country.

Didi Lo, Founder of Lo Bros, said they are proud to announce the launch of Lo Bros Not Soda, a fizzy zero-sugar, naturally sweetened soda that comes in four flavours – Raspberry, Lemon, Orange, and Pink Grapefruit.

“It tastes like the best sodas you’ve tasted, while being zero sugar. But most importantly of all, every can of Not Soda directly addresses the environmental crises being created by the soda industry.”

For every can of Not Soda sold, Lo Bros will fund the removal of the equivalent weight of two plastic soft drink bottles from marine environments through a partnership with Seven Clear Seas.

Michael Connolly, General Manager Merchandise and Marketing at Drakes, said as leaders in the retail, they have a responsibility to be part of the change for good.

“This is a soda our consumers can feel good about. It’s not only zero sugar, but it contributes to saving our seas at a time when climate change is a global emergency.”

Each year, up to 34 billion plastic bottles enter the ocean. In Australia, 75% of all beverage aluminium are collected for recycling. Unlike plastic which can only be recycled 1-3 times before degrading and sent to landfill, aluminium is infinitely recyclable.

Tom Peacock-Nazil, Co-founder of Seven Clean Seas, said partnering with Lo Bros Not Soda will generate tons of positive environmental and social impact whilst giving the existing soda market the disruptive shove it needs in the right direction.

“Not only is the product designed for recyclability and true circularity given today’s infrastructure, but some of its profit is allocated to cleaning plastic pollution from our oceans.”

Fred Harrison, CEO at Ritchies, said connection to their community has always been front and centre for the company.

“We know this mission is something our customers will be excited to get behind, as are we.”