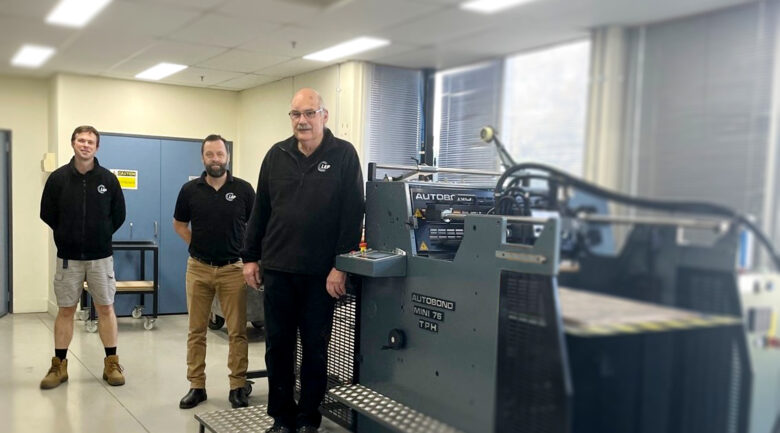 Graph-Pak managing director Tom Ralph said that LEP Colour Printers bought this laminator as it had previously installed the machine in its QLD premises and wanted the same machine in its expanding Melbourne facility.

“LEP has the Autobond Mini 76 TPH at its plant located north of Brisbane and the machine has run effortlessly and with very minimal maintenance all the way through – it was always an Autobond fan,” he said.

“With LEP expanding into Melbourne, it started operations with some entry-level laminating machines which couldn’t deal with the workloads. So, the company ordered another Mini 76 TPH from us.

“To continue to work with LEP, at this level of professionalism, is just an accolade to the work we’re doing – it shows that we’re doing the right thing and supplying equipment that people love.”

The equipment, which was installed at LEP’s premises at the end of August, is a fully automated machine.

“TPH means that the machine comes with thermal laminating, perfecting and a Heidelberg Speedmaster feeder. It has a perfector built online, so you can do two sides in one pass,” Ralph said.

“Traditional laminating machines are single-sided and companies just entering the market may start with these machines, but with growth they soon realise that they’re double handling work. This machine is at the premium end; it is an A1 machine that runs at 60 m/min and has a fast make-ready system as well as a short footprint.”

LEP Colour Printers CEO John Bromfield said the company has improved its processes since it got the Autobond Mini 76 TPH laminator.

“Before we installed the machine, our single-sided cello machines were slowing down production times, due to increased make ready times and material handling,” he said.

“The Autobond Mini 76 TPH is tried and trusted technology for the business, with LEP already having a similar machine at our QLD production facility. Its perfecting capability, i.e., laminating both sides in the one pass, was the stand-out feature that attracted us to it.”

Bromfield added that the laminator will further support the company’s plans moving forward as it prepares for more growth and additional capacity.

“The Autobond 76 TPH will support the company’s plans for growth by providing additional capacity, as well as shorten lead times due to increased production efficiencies that come with running a perfecting machine,” he said.