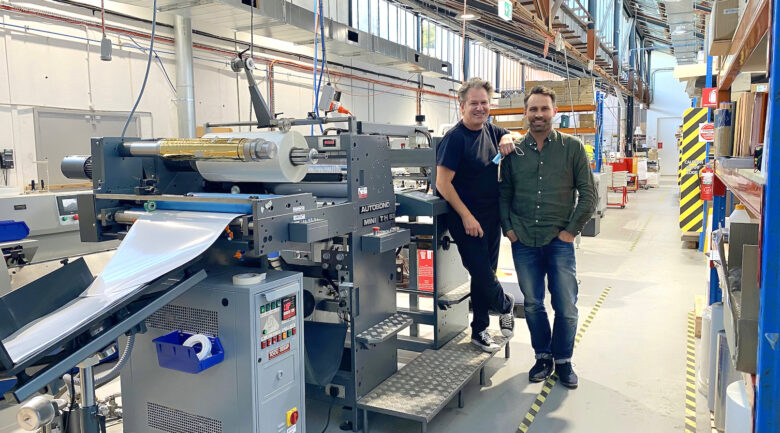 Sydney-based printing consultancy Carbon8 has purchased its first machinery from Graph-Pak – a refurbished Autobond Mini 53 TH with digital foiling – as the company expands its capacity.

Carbon8 co-director Kenneth Beck-Pedersen said that for many years, the business has been surviving on an aging laminator and with growth, needed more suitable equipment.

“Our previous machine was, in fact, our first purchase over 14 years ago and was single-handedly supporting all our celloglazing and digital foiling requirements,” he said.

“But Carbon8’s business has fundamentally shifted and grown in those 14 years, so it stands to reason that we were well overdue for an upgrade in this department.

“Our need for greater speed, versatility and reliability is driven by our growth into the B2 digital space with the HP Indigo 12000 and we believe that the Autobond Mini 53 TH with digital foiling will now take us through the next 14 years.”

Graph-Pak managing director Tom Ralph said Carbon8 has a reputation in the industry for using high-end equipment, and the Autobond Mini 53 TH suits its needs. The company also wanted a laminator that was fitted with digital foiling, which Autobond and Graph-Pak delivered on.

“Carbon8 was doing a number of processes slowly before it got the Autobond Mini 53 TH, and one of those processes was foiling. We showed Carbon8 samples of what the Autobond with digital foiling can do, following which it wanted the laminator with further enhancement of a digital foiling system attached to it, which is bread and butter for Autobond,” he said.

“Since the machine was installed about three weeks ago, it has never stopped. The difference it has made to Carbon8’s plant and bottom-line is amazing. And to get Carbon8 to join the Graph-Pak club was sensational.”

The Autobond Mini 53 TH is an A2 machine which laminates sheets 530mm wide by 750mm long. It comes with thermal laminating, a Heidelberg Speedmaster feeder, strip-cello and rewind ability, as well as digital foiling inline.

Beck-Pedersen said Carbon8 chose the equipment for its balance of quality, speed and reliability.

“We went through lots of testing and sampling with Autobond and various other competitor machines, but the balance of quality, speed and reliability was won by Autobond,” he said.

“The water-heated drum appears to support greater quality in our foiling tests and that contributed to the great speed of the machine. Our research also indicated that Autobond is the industry-leading supplier of celloglazers and Carbon8 has a history of partnering with the industry best solution where possible. This was no exception.”

He also said the machine will allow the business to be far more productive in all its celloglazing needs moving forward, as well as provide outputs far more per hour and with significantly reduced labour costs.

“We’re conscious of our environmental impact as well and having less paper, cello and foil wastage as a result of its improved machining and build supports our company ethos.”