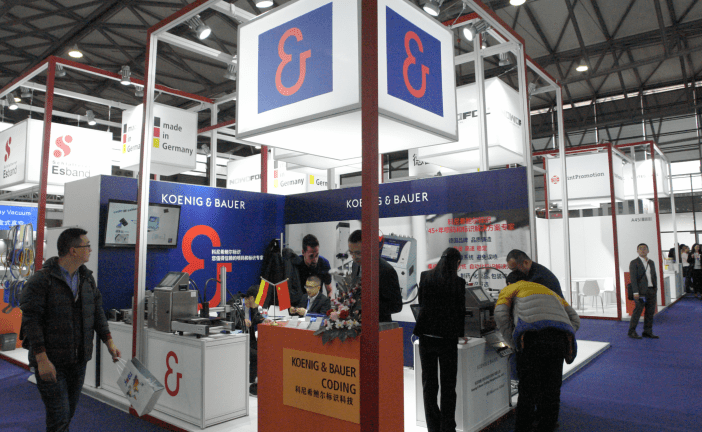 The number of exhibitors at the recent Shanghai World of Packaging 2019 show rose sharply, with German packaging technology taking centre stage at the event, according to its association partner. 800 international companies took part in the show, with numbers far higher than the figure for SWOP 2017, which had 487 exhibitors.

“The number of exhibitors has risen sharply compared to the last Shanghai World of Packaging 2017 and is twice as high as at its premiere in 2015,” Dr. Sven Breitung from the VDMA Printing and Paper Technology Association said.

He added that as a result of support from the foreign trade fair programme of the German Federal Ministry of Economics and Energy, the German stands offered small and medium-sized companies the opportunity to present their packaging solutions in China’s booming packaging market.

A total of ten medium-sized companies from the printing and packaging machinery industry took advantage of this opportunity.

According to Dr. Breitung, the visitor response in the German Pavilion was gratifying.

He said he was therefore optimistic that he would be able to further expand the customer base and market penetration on site in the coming years.

“SWOP 2019 was once again an important milestone for Max Schlatterer GmbH on its way to sustainably placing our brand and our product portfolio in the Chinese packaging industry,” he said.

NOWOFOL GmbH & Co KG also took up the offer of the German Pavilion at SWOP for the second time.

Its MDO and Cast Films head of sales Christian Muhm said participating in the German joint stand at SWOP 2019 was an excellent opportunity to work the Chinese market.

“This time we had many inquiries from interested parties, which we were now able to answer with our Chinese agents,” he said.

Greiner GmbH & Co KG managing director and COO Stefan Greiner said the show was an important one for small and medium-sized companies.

“The participation in the joint stand promoted by the Federal Government also offers small and medium-sized enterprises a very good platform for working this important market,” he said.

Dr. Breitung said forecasts show that the Chinese packaging market will grow at annual rates of 6.8 per cent until 2023 – more than twice as fast as the global market (plus 3.1 per cent annually).

This is in comparison to 2010, where it was still just under 45 per cent of the gross domestic product, but by 2018 it had already risen to 76 per cent. Accordingly, China is also now the export market with the strongest sales for German packaging and printing press manufacturing alongside the USA, Dr. Breitung said.

The drupa world tour 2019/20 also made a stop at the trade fair in Shanghai. At the event, two representatives from VDMA and Messe Düsseldorf presented the most important technology trends in printing and paper technology as well as the concept and hotspots of the trade fair for the print, packaging and media industries.

For drupa 2020, it is expected that German machine manufacturers will announcing numerous innovations around megatrends like Artificial Intelligence, Connected Customer, Platform Economy and Circular Economy.