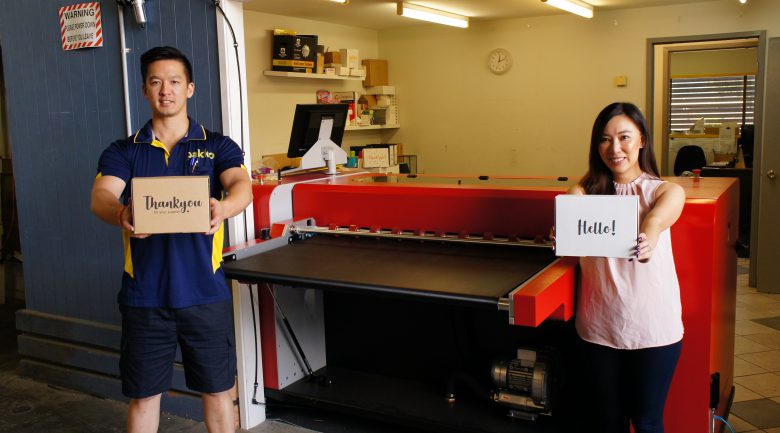 Pakko was founded in 2017, Owner Nina Nguyen, a strong believer in Australian manufacturing, determined to go beyond being a traditional box manufacturer.

By adding Australia’s first four colour CMYK MTEX digital printer, supplied through Neil Southerington at Graffica, Pakko has been able to turn a box, be it a standard shipping carton or a beautiful bespoke creation, quickly and easily into a fully marketable product for a reasonable price.

The fact that a printing plate is not needed substantially reduces the cost which is why it is so suitable for this custom and short-run packaging space.

“Our mission is to bring creativity and colour into every box and make it meaningful in every experience,” Nguyen said.

Pakko general manager Tony Ong said the decision to buy the MTEX was already paying off, with the stand out benefit the ability to print logos and other marketing material directly on to a packaging carton given the MTEX’s ability to handle 1m wide stock.

“That was basically the key reason for buying the press,” Ong told Sprinter, adding this is now the third digital printer owned by Pakko.

“We’ve got the capability to do majority of the work in house which means we can speed up the work and make it more cost effective for the end user.

Ong has also been actively involved in launching the next phase of the business’s plan for expansion, an Interactive Design Platform (IDP) e-commerce site.

“The Interactive Design Platform, named and designed by Pakko, has been designed to be the first of its kind in Australia to allow people whose knowledge about packaging may be limited to be able to select, design and get quotes for their packaging almost instantaneously,” Ong said.

“The intent is to change and make the experience of procuring packaging much more pleasant and simple.”

The site allows users to select their own box type, add dimensions and visually see the packaging product in 3D including the ability to open and close the box. It also instantly downloads key lines without the need for a designer to produce it. The end user has the ability to design their own product or download a keyline and then re-upload. Quotes are provided instantly.

As well as servicing a number of core clients, Pakko also supports and partners with local trade businesses.

Pakko were also a finalist in the 2018 Australian small business awards.