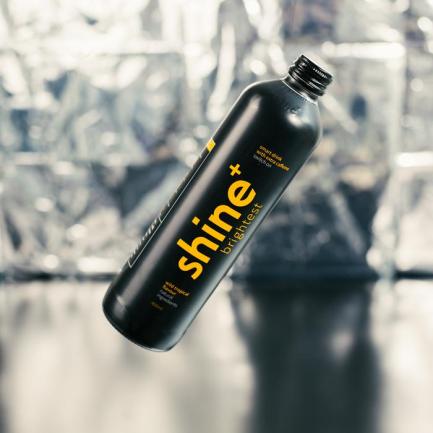 Shine smart drink CEO Steve Chapman spoke to ProPack about the packaging process of the bottles and shed light on their difficult production process saying the design had dramatically changed from what the company originally wanted.

“So, what we did, was we then bought all these bottles, like hundreds of thousands of them, and they came, they were painted and looked beautiful; but then we ran them down the line, and every bottle, 98% of them completely grinded the paint off at the shoulders and the feet, clearly we can’t sell that,” says Chapman.

“That was disappointing because the manufacturer and packaging supplier guaranteed that he tested them, and that can go down the manufacturing line, and all the rest of it but unfortunately we found out it couldn’t, so we then had to figure out okay alright, how are we going to sleeve these things, to make them look, not even look as good, but be better, so then we came up with the shrink sleeve to then run them down the line.”

“Also the first mock up bottles, and things like that, we wanted to create a custom bottle but still comply with standard manufacturing aspects so things like bottle diametre, things like shelf space height, so although these look like they’re super tall, they’re actually the standard like a 600ml coke, or a 330ml kombucha or something, they’re the exact same height so they fits in all the shelf space but then to get the right diametre plus height, you then had to like get fancy I guess with some of the design elements of it.”

Shine has always thought of themselves as a point of difference, and with the 110ml shot, the on counter impulse strategy played a major role in the companies marketing. The aim was to stand out from the crowd of basic beverage and not compete with million dollar marketing budgets.

“Our ambitions have always been big and thankfully the market agreed with that and so we started looking at okay what is a mass market version of this and how do we service not just our initial customer but then a wider population that aren’t drinking a shot off a counter at the moment because they don’t drink drinks like that, like it’s an unknown format.”

“So then we looked at okay, how do we make this, and again we asked our customers in that same survey, and they were like, “I’m often buying this, and a drink of like sparkling water or like a bottle of water as well because they want to hydrate and they wanna get a refreshment piece of it as well, this is just like a functional, delivery mechanism for the benefits, but they wanted something that they can actually enjoy as well.”

Shine has recently received feedback from customers regarding the bottle lids being too tight.

Shine has  since solved this with a new lid made from metal aluminum.

The current bottles being stock bottles,have plastic lids are susceptible to things like the temperature.

“So then plastic will shrink and/or expand quite easily. When we then heat up the drink, in terms of how we process it sometimes, to make sure its safe and shelf stable, you know the liquid going in, can be quite hot, which then expands the lid and when it goes back into the warehouse, then it shrinks, so it makes it ridiculously tight,” says Chapman.

“We did a blog post like here’s a fun way to open it, we since solved by using to metal aluminium, this increases shelf life, decreases oxidation and it looks better as well.”

Another challenge for the company was the shipping of glass bottles.

“We had these little bottles and they’re glass and we had to ship them around the country, and then the first shipping we did nationally 75% of them completely smashed.”

“No one knew how to ship glass bottles like in a display pack ready to go because that’s pretty much how it ships.”

“We then we had to create this divider in the bottom and then the neck holder as well to make sure they shipped properly while still maintaining the quality of like the actual packaging look nice and beautiful.”

Shine discovered changing the size of the dividers in the box can reduce the space on the counter.

“It’s more compact, we found out if you compress them, you can see its like a 33% space reduction but the exact same number of bottles and you can fit this on way more counters across Australia.”

“Consumers wanted natural ingredients and were becoming more aware of what they were putting in their bodies. They wanted healthy ingredients and clean labels, low sugar and low calorie but not sacrifice too much flavour.”