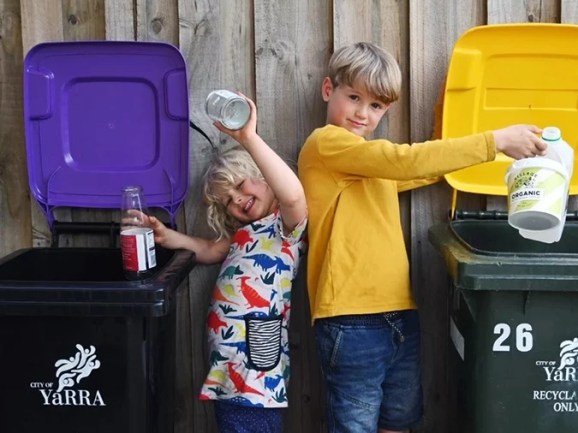 Thousands of Victorian households will soon be able to recycle more efficiently and divert tonnes of waste from landfill as a result of the Victorian Government’s roll-out of the four-bin waste and recycling system.

Minister for Environment and Climate Action Lily D’Ambrosio recently delivered some of the first purple bins for glass collection, which are currently being rolled out in Whittlesea, announcing grants to transition to four bins across the state.

The Victorian Government aims to introduce a separate glass service to all local government areas by 2027 and a food and garden organics collection by 2030.

By separating glass, it said Victoria will be able to recycle more glass into new products and recycle more materials from the mixed recycling bin.

As part of the Victorian Government’s Circular Economy Household Education Fund, 15 councils will share in over $1 million to deliver local campaigns as they introduce new services, or to improve their existing four-stream household recycling services.

All councils and alpine resort management boards are eligible for funding under the $6.03 million Circular Economy Household Education Fund.

The four-stream recycling system will help divert 80 per cent of all material away from landfill, including 20,000 tonnes of glass, as part of the victorian Government’s waste and recycling reforms that will create nearly 4,000 new jobs and boost Victoria’s economy by up to $6.7 billion by 2030.

The Government has invested over $515 million to deliver the biggest ever transformation and reform of Victoria’s waste and recycling industry. This includes $380 million to deliver Recycling Victoria which will fundamentally reduce waste, boost jobs and establish a recycling system on which Victorians can rely.

D’Ambrosio said, “We’re getting on with rolling out the game-changing new four-stream recycling system, keeping glass and other valuable resources out of landfill and recycling them into new products.

“Our new household recycling services will maximise our recycling capacity, create new jobs and divert 80 per cent of waste from landfill by 2030, reducing emissions be 50 per cent by the same year.”