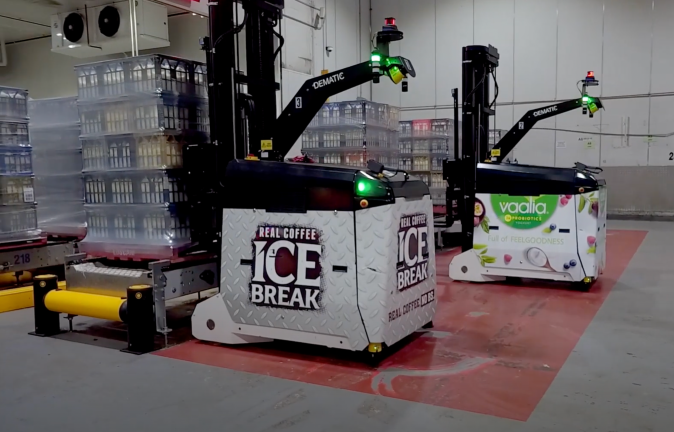 Building on its initial deployment of four Dematic Automated Guided Vehicles (AGVs), Lactalis Australia, part of global dairy producer Lactalis, has invested in an additional AGV for its fleet.

According to the company, the investment comes in a bid to boost its warehouse-wide efficiency at its Lidcombe Milk Site in NSW.

With the addition of a fifth AGV to operations, Lactalis said it is now able to expand automation to more areas within the warehouse. All five AGV units will work cohesively together, with the flexibility for each of them to operate within different areas of the warehouse to retrieve products ready for dispatch.

“Dedicated to investing in and growing the Australian dairy industry, as well promoting Australia as a high-quality producer for the Asia-Pacific region, this transition into site-wide automated operations with AGVs has helped Lactalis to significantly streamline our operations,” Lactalis national logistics optimisation manager Kristian Brennan said.

“After already experiencing major improvements to productivity with our initial adoption of Dematic’s AGVs in 2019, this new addition to the fleet will allow us to further automate our operations in both inbound and outbound zones within the warehouse.”

The fleet of AGVs work to retrieve pallets from an inbound conveyer system from production, and then feed the pallets into an order buffer, releasing the pallets at a declined angle onto pallet live storage racking.

AGVs are capable of operating 24/7 in both small and large spaces and managing tight traffic at speeds of up to 1.7 metres per second.

The AGVs manage the transportation of pallets of milk at the Lidcombe site and are capable of lifting loads of up to 1.2 tonnes to a height of six metres. Additionally, the company said that the AGVs are well suited to working at the site’s chilled environment, which has a temperature of just 2 to 4 degrees celsius.

Dematic general manager of AGVs Tony Raggio said AGVs are an innovative automated solution, with improved accuracy and safety around workers and any obstacles, ensured through sensors and laser scanners that help them navigate with precision. They are powered by Lithium-Ion batteries and can drive themselves onto charging floor plates at times of inactivity to be fully charged in two hours.

“Lactalis is a fast-growing company in Australia, and now with a complete fleet of AGVs, they are able to automate several areas of the warehouse, which allows them to optimise picking and dispatch operations across the board,” he said.