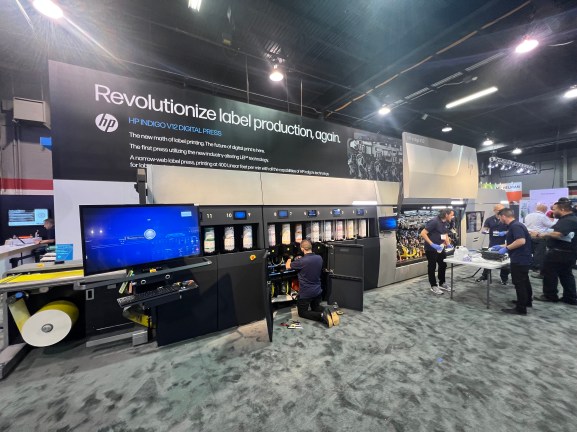 HP has provided the label industry with the first glimpse of the Indigo V12 Digital Press with a show-stopping arrival on its stand at Labelexpo in Chicago.

Visitors were three and four deep across the 15-metre face of the machine for most of the first day of the show to see the new printer for themselves.

The Indigo V12 is the first press to utilise LEPX technology that the company claims will be ‘industry-altering’ – delivering 120 linear metres per minute with 12 HP ElectroInk stations and 1600dpi image resolution.

The LEPX multi-imaging architecture incorporates six imaging engines – each making its own colour separation on the blanket belt simultaneously. The new LEPX writing heads feature thousands of LEDs to compose an image as an electrostatic field at 1600 dpi.

Here’s a video of HP’s Rolando Martinez giving a demonstration of the machine:

HP’s Elad Zmora highlighted the potential of the new press in the video below:

HP Indigo A/NZ distributor Currie Group’s Mark Daws was also at the tradeshow, excited about the first showing of this press:

Here’s a video of a close up of the press:

The video below shows the speed of its output:

To peer into the belly of the beast expected to sell for over $2 million, ProPack.pro obtained these images of the HP Indigo V12 from the floor on the first day Labelexpo in Chicago: