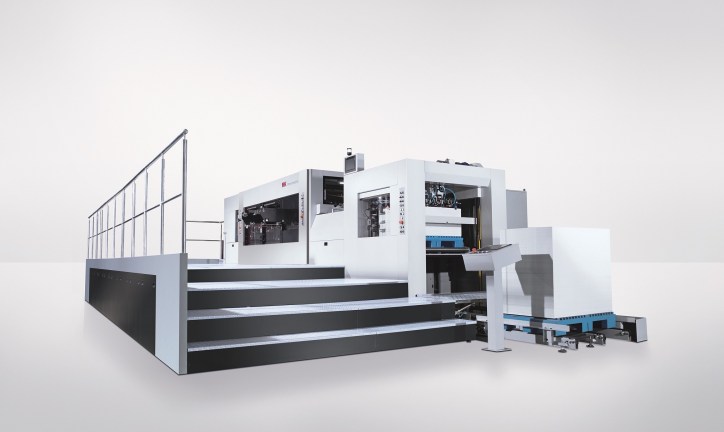 Heidelberg has launched a number of solutions to further beef up its packaging portfolio, which includes new products such as its large-format die-cutter Promatrix 145 CSB, the Powermatrix 106 CSB, and new Multimatrix 60 FC die-cutter.

The company, together with its partner MK Masterwork, have taken the wraps off the Powermatrix 106 CSB (cutting, stripping, blanking), which works at a speed of 8,000 sheets per hour.

Equipped with pallet logistics and an auto non-stop feeder, this machine is suitable for customers with higher material throughput.

The MasterSet optical register system for the feeder was originally developed by Heidelberg and enhanced by MK. MasterSet aligns every sheet using print marks. Positioning can also be performed using the print image or the edges of the sheet, if there are no print marks available.

The MasterSet cameras can also be positioned on the underside of the feeder, for example in order to die-cut corrugated cardboard with the printed side downwards. A separate sample sheet delivery enables the operator to pull a sample sheet for checking without stopping production.

Like all die-cutters offered by Heidelberg, the Powermatrix also bears a GS mark.

Also new is its first large-format die-cutter Promatrix 145 CSB with a speed of 7,000 sheets per hour.

Heidelberg has also unveiled its Multimatrix 60 FC for short runs for digital and commercial printing.

Suitable for smaller printing companies that may use Heidelberg jobbing and cylinder presses, the company said the solution is ideal for a digital folding carton production workflow, for example with a Versafire and the Diana Go folder gluer.

The Multimatrix 60 FC can optionally be equipped with a hot-foil unit, which enables a wide range of value-add finishes and flexible use of the die-cutter. The die-cutter produces at a speed of 5,500 sheets per hour and is also equipped with MasterSet. It is suitable for runs up to 1,000 cartons and is available for order.

Heidelberg has also made upgrades to Diana Smart, allowing it to run up to 33 per cent faster at up to 600 m/min.

The new Diana Inspector offers an extended range of materials and can also inspect difficult materials such as metallised board, holograms, or hot foils. Another new feature is that printing defects and color consistency can be checked using a PDF comparison. The second generation of the Diana Braille unit now contains an option for the sheet register, which reduces the setup times for Braille.

It has also made available Diana Packer 4.0 for automated packing in outer cartons. For the first time, communication between the folder gluer and the Diana Packer 4.0 ensures that carton geometries only have to be entered once – the second entry on the packer previously required is no longer necessary.

“In commercial printing, the postpress department accounts for the highest personnel costs at typically around 60 per cent,” Heidelberg head of postpress business management Jörg Dähnhardt said.

“We’ve diversified and extended our range of die-cutters and folder gluers and can now also mirror the productivity of our printing presses.

“In order to be able to keep up with the higher speeds of the Diana Smart, we’re using a loading robot for the first time. The Diana Packer 4.0, which can pack up to 200,000 cartons per hour, can handle the speed at the delivery.”

Heidelberg has also announced the launch of its Stahlfolder P-Stacker, a six-axis industrial robot system for autonomous stacking of signature stacks at the delivery, relieving the operator of physical work.

First deliveries are planned for October this year.

Its Push to Stop concept is also now also available for folding machines.