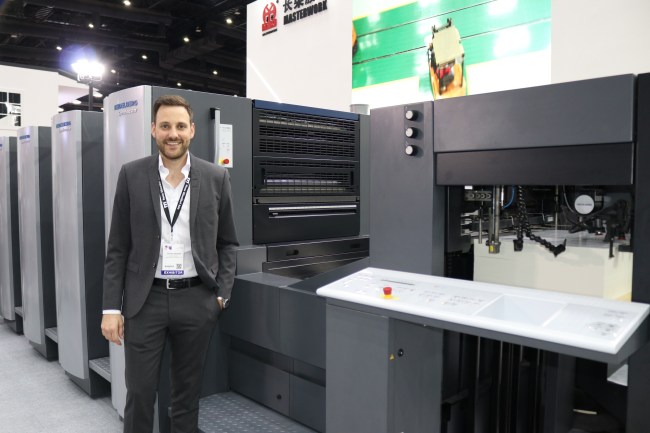 Heidelberg has taken the wraps off its latest solution, the Speedmaster CX 75 at the Pack Print International trade show in Bangkok.

In a world premiere, the German-made machine for commercial, label and packaging printing is a similar version to the Speedmaster XL 75, but with a ‘facelift’, according to Heidelberg Thailand managing director Jochen Bender.

“It features a new layout. This is a press in 75 format size and is based on the XL 75, which we sold about 19000 printing units worldwide. We have made some optimisations in the feeder and the delivery and this press comes in a four colour configuration but we can go up to six colours with a coder,” he said.

“What we target and market for with this machine is thin materials to thick materials, so for a commercial printer who wants to step into packaging or a packaging producer who also makes a few smaller leaflets, like pharmaceutical, for example, this is the perfect machine for them.”

According to Bender, the inclusion of the cylinder concept from the XL 75 with double-diameter impression cylinders opens up a wide range of applications and a variety of substrates.

The flexible straight-printing press comes in a 50 by 70 format, can easily integrate to pressrooms as it has a small footprint, and is said to have 70 per cent less steps between its control station and press.

“If you’re a commercial printer and looking to expand into packaging, you will not have only packaging jobs overnight. So you’ll need to have a flexible machine which gives you the possibility to produce both kinds of products in an efficient, cost effective way,” Bender said.

“This machine can go from an 80gsm to a 350 gsm – very thin to thick in five minutes. And it can be preset, meaning it requires no manual intervention from the operator.”

Bender said the company chose to launch the machine in Thailand as it has the demand for such solutions in the market.

“Thailand is one of the strongest markets worldwide for this kind of machine. We have sold many XL 75s here and since the country has plenty of sheet-fed printers, we expect the CX 75 to be just as popular here,” he said.

“Thailand also has more SMEs than some other countries that want to step into packaging or who need to replace an older machine, like an SM 74 or CD 74 with newer equipment. This machine is more advanced, and allows for a more seamless process.”

At the trade show, Heidelberg, together with its partner Masterwork, also introduced their end-to-end packaging production workhorses. Heidelberg sold all the equipment off its booth by day two of the show, and also brought in a number of orders for the solutions it had on show.