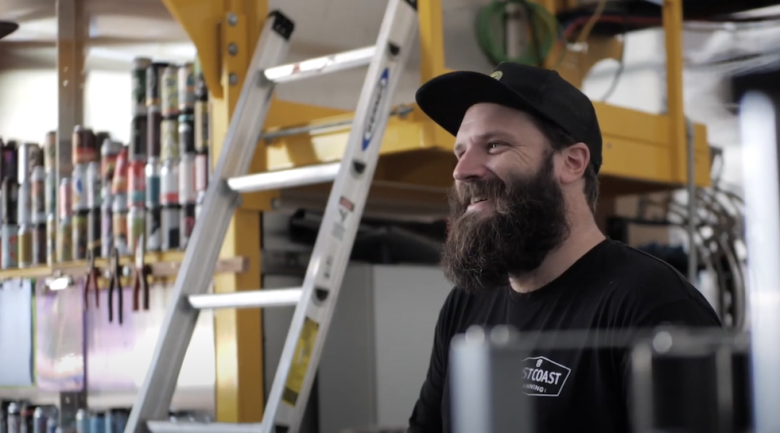 In a 1,000 square metre former aircraft hanger mobile canners East Coast Canning are charting a flight path to become the predominant can decorator for Australian craft brewers after outlaying over $5 million to own the first direct-to-can digital printing machine of its type in the country.

The recent arrival of their German-made Hinterkopf D240.2 digital printer follows three years of forward planning by East Coast since founder Chris ‘CK’ Kelly determined, that at some point in the future, “printing directly to can was going to be the way forward” for craft beverage producers.

Having closely watched the North American direct-to-can printing industry “explode” of late, CK said the printer’s presence in Australia will instantly give local breweries a better looking product that will save them money and reduce their environmental impact in the long run.

He said the purchase of the $4 million-plus digital printer was “kicked over the line” by a Federal Government Modern Manufacturing Fund grant of $1 million while the entire cost of the project amounted to over $5 million once shipping and the likes of specialised Codi Manufacturing-built equipment was factored in.

“We’ve been working towards this for something like three years now,” CK said. “The tech has been there and progressing slowly in the background and we got wind it had got to the right place about two years ago.

“(Knowing we would purchase one) has been a key reason why we’ve been doing a lot of the things we do as a business – like why we pre-label cans instead of labelling in-line at sites.

“It’s all stemmed from the realisation that printing directly to can was always going to be the ultimate. Now (the machine is here) we see ourselves as being able to offer the ultimate product portfolio for small run beverage producers – or people who want to do small runs.”

The digital printer, which was the 18th of its type produced by Hinterkopf, will be housed in a 1,000 square metre former aircraft hanger from Bankstown Airport that has been reassembled at East Coast’s headquarters in Culburra Beach on the NSW South Coast. CK said it will be a three week lead time for breweries to receive their minimum order of printed cans, where East Coast will handle door-to-door delivery.

In terms of cost comparison, CK said their new service would be on par with printed labels “when all costs are factored in… while we know our pricing can get better as the volume and scale comes on”.

Once the machine is fully operational East Coast will be capable of digitally printing 92 cans per minute “to the neck” on the whole gamut of craft can sizes – from the ubiquitous to the unique squat and sleek styles as well. At this stage they won’t be accommodating slim style cans due to demand and while the D240.2 can print on the likes of cosmetics tubes it’s not something they’re considering currently due to the retooling required.

Whilst the printer’s colour range is similar to that available to printed labels it offers things like spot gloss and matte finishes which CK said will open up broad textural ideas to breweries. It can also print variable data – so every separate can that comes out, once the ink and varnish have been cured with UV and LED light, can be different.

“We’ve hired some digital printing gurus to help run this thing and sink their teeth in to it.

“There are so many capabilities of being able to offer highly customised marketing activity, while brewers have been looking to improve the aesthetics of their cans… and being able to print right to the neck is really important.

“Let’s face it, the big frontier at the moment for the craft industry is the non-craft drinker and opening up the market and improving overall total market size through those drinkers. So I think it’s critical that we hit them with an overall experience they can relate to.”

Change for the better

The move to direct-to-can printing means East Coast will transition entirely away from pre-printed labels. CK said he imagined there would be a teething period as current clients, as well as ones they’ve never worked with before who have since placed digital printing orders, come to grips with the system.

“We’re going to need to prove ourselves, no doubt about it. We know this is the ultimate product for the market. It’s now our job to show everyone that that’s the truth,” he said.

“For a number of years I’ve put my hat in the ring and said openly ‘I still understand why people choose glass (for their packaging)’. And this may prove similar for us. We’re not saying labels look bad. We’re saying digital printed cans can look better and at the same time be better for the environment.”

Being one of, if not the, biggest buyer of labels in the Australian craft industry CK said East Coast alone would remove 14 tonnes of plastic from their production output in the next 12 months by moving to direct-to-can printing. He said it enables the wider industry to improve their overall green credentials as well.