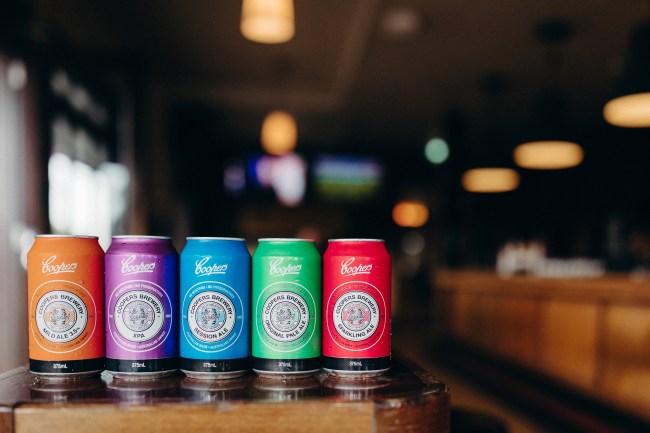 One of the largest Australian owned breweries, Coopers, has introduced its sparkling ale range in can form.

Coopers Brewery marketing and innovation director Cam Pearce told ProPack.pro that within its ale portfolio, its Original Pale Ale and XPA, along with Session Ale, Pale Ale and now Sparkling Ale are available in cans.

Pearce mentioned that the decision was made to outfit sparking ale in cans to ensure maximum shelf stand-out.

“To achieve this, the decision was made to colour the entire surface of the cans. Achieving the appropriate final colour on the cans required considerable work with inks to compensate for the impact the silver sub-surface had during printing,” he said.

The first cans to be released in the new ale series were the mid-blue Session Ale cans, followed by Mild Ale in revamped ochre coloured cans.

“The green and red colours used for Coopers Original Pale Ale and Sparkling Ale bottle roundels flowed through to the cans, while a bold purple was chosen for XPA as it is a distinctive colour,” Pearce said.

“The outer packaging was designed to hero Coopers’ key brand assets and ensure they stand out on shelves and cool rooms. The retail environment can be very cluttered and hard for shoppers to navigate.”

Another reason for the switch to cans, according to Pearce, was customer demand.

Each year, the Great Australasian Beer SpecTAPular (GABS) surveys beer lovers for the GABS Hottest 100 Aussie Craft Beer and this year, 77 of the top 100 beers in the survey were available in cans, compared with only four in 2014.

“Cans are now a preferred format for many beer drinkers, particularly within the crafted segment. Since we launched Coopers Original Pale Ale in cans last year, there has been a groundswell from consumers for the release of Sparkling Ale in cans as well,” he said.

“We listened to the calls and have responded accordingly.”

Coopers began experimenting with packaging ales in cans back in 2004, when it released Dr Tim’s Traditional Ale.

“By 2017, Coopers was confident enough to introduce Session Ale in cans as well as bottles and kegs.”

For Coopers, the transition to include cans was achieved as a result of collaboration between the brewers, packaging suppliers and brewery staff, and advances in can technology.

From a sustainability perspective, Pearce said cans have some advantages over bottle in that the aluminium is highly recyclable, while glass bottles are single use only.

“For consumers, the price of beer in either format is similar.”