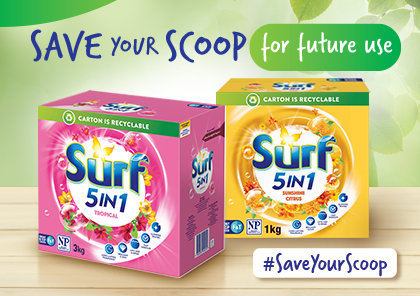 While the scoops are currently recyclable, in removing them from packs, parent company Unilever said it will reduce the amount of plastic in circulation in Australia by 7.7 tonnes (the equivalent to 1.9 million plastic scoops) every year.

Alongside scoop removal in New Zealand, the move will see a reduction in 22.6 tonnes across the continent.

It added that the landmark move is in line with Unilever’s global commitments to transform and reimagine the way its cleaning and laundry products are created, manufactured and packaged so that they are kinder to the planet.

Unilever A/NZ head of homecare Lorna Ash said, “Plastic scoops are a safe and useful tool for Aussies to have in their laundries, but we recognised that including a scoop in every pack just wasn’t necessary.

“By removing the scoops from our Surf powders, we’re giving Aussies a more sustainable option at the shelf, whilst still ensuring they get the best clean for their clothes.”

Ash added that Unilever is communicating in the packs to ‘save your scoop’ in the coming months.

“We want to ensure that shoppers have enough time to prepare for the change in June. That’s why we’re asking Aussies to keep hold of their existing scoops now, so that their laundry experience with Surf remains as easy and effective as it always has over the next few months and beyond,” she mentioned.

“We will also continue communicating the dosage in ‘scoops’ on the Surf products, so it’s important to hold onto this key measuring tool. If you find yourself without a scoop, contact the Surf customer care line and we’ll send you one to use repeatedly.”

Many of Unilever’s popular laundry brands including Omo and Surf are already delivering products made with recycled plastic packaging, and concentrated formats made with less plastic such as the Omo Dilute-at-Home bottles.

The company has also launched Omo liquids made with naturally derived ingredients, as part of its commitment to replace 100 per cent of the carbon derived from fossil fuels in product formulations with renewable or recycled carbon by 2030.