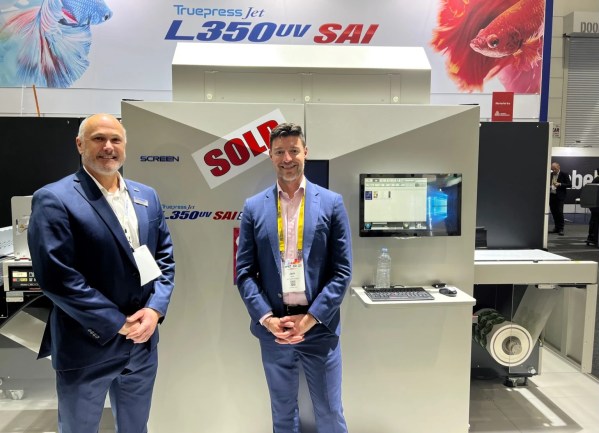 Screen GP and Jet Technologies joined forces at PacPrint to demonstrate the next generation of the Truepress Jet L350 SAI, a UV roll to roll inkjet label press, at PacPrint in Melbourne.

The original release of this popular label printer was first shown in PacPrint in 2013 with this version marking the next series for the model.

Screen GP managing director Peter Scott said, “This is the next generation of the Truepress. The main differences between this model and the next model are it has extra colours. It now has up to seven colours including CMYK, white plus orange and blue. This combination gives a very nice wide gamut to cover more spot colours as our customers need.

“It also has dual UV curing for extra adhesion. So, overall it is faster and more productive than the old one because it just does everything quicker. Its top speed is the same but the time it takes to process a job and actually start to print has been improved, along with the shutting down time. This means there is an overall productivity increase.”

Scott said the other key improvement on this new series is the speed with which white ink can be printed.

“White ink has titanium oxide in it so it is heavy and you need to slow the machine down to get that so we have been able to improve the speed dramatically.

“This feature is optional. So, you can buy a machine that doesn’t do that but the ones that we have been selling it comes with the high-speed white, the dual curing and the seven colours.”

Finishing of the labels can be handled both inline, through a number of manufacturers, and offline, depending on what is required.

“It is a roll to roll press but you could have some inline finishing if you wanted to,” Scott said.

“Screen does have the ability to interface with a number of different manufacturers products.”

Malki said the press has been successful in Australia.

“This is the first time we have shown this version and since we introduced it into Australia it has been a huge success. It is the biggest selling inkjet label press here and customers often comeback for a trade in or they get a new one. The refurbished ones are resold. They are designed to last and be very reliable for a long period of time which is not what you usually expect from a digital printer. You will get 10 years out of one of these, or even more than 10 years at the highest levels,” Malki said.

There are now over 10 Truepress label printers in Australia, with four of the latest next gen model also installed.

“Jet Technologies are amongst the largest distributors of films to the print industry and have been doing that since 1999 – quite some time,” Malki said.

“Over that time, we have been known to launch a number of innovative products.

“For example, we were the first to launch soft touch films and subsequently Rough touch – films that bring a sensory impact to print.

“Last year we launched SteriLam – a film that is found to be effective in killing the virus behind Covid19. Now, we are pleased to launch a new range of films called “Encore”.

Malki said Encore is a BOPP film available in gloss and matt, that contains 30 per cent recycled polypropylene.

“Encore is arriving in Australia next week – unfortunately too late for PacPrint but we are working with some key clients to have the product run within July,” he said.

“BOPP is used very widely in labels, packaging, books…all sorts of print and to be able to maintain the highest levels of quality but reduce the environmental impact substantially is a huge step forward.”