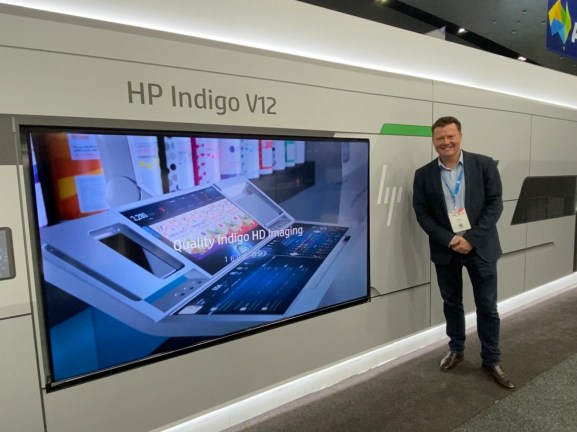 Currie Group will be bringing to A/NZ HP’s Indigo V12 at the end of 2023, following its upcoming global launch at Labelexpo Americas in Chicago in September.

“The V12 is our Series 6 press and it is completely redesigned from the ground up. The V12 is a press that has been in development for a number of years. It runs narrow-web at a speed of four times faster than anything we’ve seen before with the traditional HP Indigo ElectroInks,” he said.

“We call it a V12 as we’re able to run 12 colours on it simultaneously. We’re expecting it to be globally released in the later half of this year and at the end of 2023 locally through Currie Group.”

The machine is also able to print up to 130,000 linear metres a day with a single pass operator and is able to produce 1600dpi at maximum speed.

Sustainability is also a key focus for HP, with Walmsley adding that the Indigo V12 meets sustainability targets with up to 90 per cent saving in media waste as there are no plates to discard and requires no hazardous cleaning fluids.

Walmsley also told Sprinter about HP’s take back program with Currie Group and Close the Loop.

Close the Loop is a global leader in printer consumables take back and recycling programs that HP Indigo and Currie Group have partnered with.

HP Indigo Spot Master is a colour automation solution that enables converters to reach brand colours in a matter of minutes, keeping high colour consistency and uniformity across the print frame for the entire print run.

Using a patented algorithm for fast and accurate colour matching, HP Indigo Spot Master provides every package with the same look no matter when or where it was printed.

The new version of Spot Master is easier to use, improves colour accuracy and supports more job types, Walmsley said.

The new capabilities include: the ability to share Spot Master colour results with the ordering brands through HP PrintOS; support for variable data jobs; support for jobs versioning; and match for more Pantone colours by using the same inks twice.