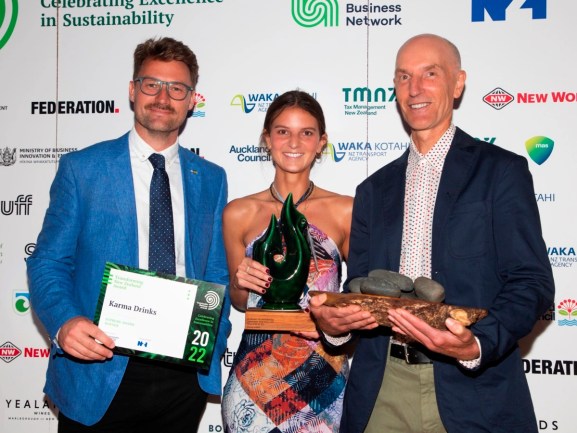 New Zealand’s Karma Drinks is the winner of the Supreme Transforming Aotearoa New Zealand Award for 2022. The local organic drink manufacturer first won the Social Impactor category, before taking the top prize ahead of the other two finalists – Ecotricity and McCain NZ’s Timaru Plant.

The judges said: “Sustainability is Karma Drinks’ core business, it is fully integrated through its value chain. From the ethical and environmental sustainability of Karma’s raw materials, to their efficient operations, carbon positive goal, diverse and inclusive people practices, consideration of sustainable packaging and freight, and giving customers the ability to amplify their social impact through the Karma Foundation. Karma’s drinks are tasty (they have won awards!) and it is New Zealand’s top ranking B Corp, and in the top five percent in the world, recognising the completeness of Karma Drink’s business for good.

“It is truly inspiring to read this application. There is a genuine depth of integrity and sincerity throughout operations. Karma Drinks exemplifies what a ‘value chain’ can be – creating real social value for communities and environmental value for the earth, all the while creating a valuable product.

“A great kaupapa of ‘delivering trade, not aid’, where communities where the cola nuts are grown are in full sovereignty of the funds they generate and are gifted through The Karma Foundation.”

Karma Drinks was born from an idea on Piha Beach, where three friends first thought of forming a company to make ‘Karma Cola’ out of ingredients that were good for the land, good for the growers and good for consumers.

To hold themselves accountable to their mission to produce the world’s most ethical soft drink, they established The Karma Foundation – one per cent of revenue from every Karma Drink goes to the cola nut growers and communities in Sierra Leone. The foundation guarantees the funds raised help drive economic and social independence.

Since 2012, more than 43 million Karma Drinks have been sold. This has enabled three bridges to be built, 135 girls sent to school and eight teachers funded, enabling education for a further 614 children in three newly build classrooms. The company has also supported farmers to revive forest farms and provided seed funding for 33 local entrepreneurs. These repaid loans have been distributed to 26 new entrepreneurs. Three villages have set up rice and groundnut seed banks, three more have rice mills, one has a guesthouse and four have new community meeting spaces.

Also a finalist for the supreme award and winner of the Climate Action Leader category is food manufacturer, McCain NZ’s Timaru Plant. Since 2020 McCain has undertaken new initiatives and innovative technologies to reduce energy use to identify ways the company could be more energy efficient and use less carbon. The company has carried out heat recovery and boiler conversion projects which have resulted in a carbon reduction of 34,517 tonnes.

Rachel Brown ONZM, Sustainable Business Network CEO and Founder, said, “Given the last two years and the uncertain times we are in, it’s more important than ever to celebrate the sustainability achievements of organisations and individuals. The issues facing our planet are now at crisis level.

“All the finalists deserve a massive round of applause for continuing with this vital work, particularly in the face of future uncertainty.

“Collectively, the nine winners are leading the way and it was great to see such diversity of action among them – including impact from organisations focusing on local issues as well as the outstanding work of purpose-led Karma Drinks, which are now recognised as a leader on the global stage. Amongst this variety were the common threads of action on climate change and a focus on sustainability throughout the chain. Congratulations to them all!”