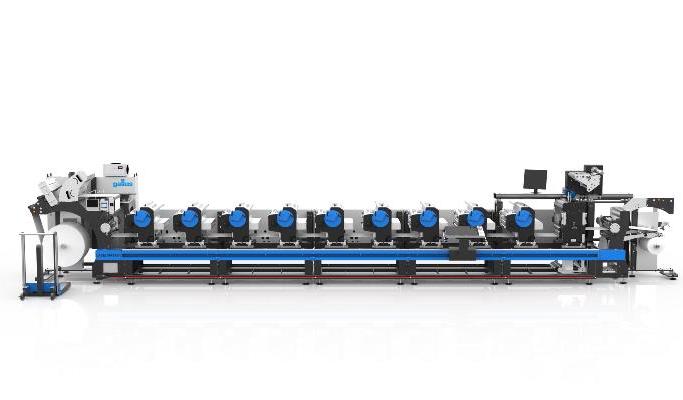 Gallus has unveiled its updated Labelmaster, equipped with optimised features including a new operating concept for greater user convenience and less waste in the daily production.

The Gallus Labelmaster now has a shorter machine length, as corona, web cleaning, transport and web tension are integrated in the new winding units, which means that one module can be saved.

Gallus said the compact design enables reduced waste thanks to a machine length that is up to 3.30 meters shorter, thus ensuring an improved ecological footprint compared to the previous version.

In addition, the winder units can now not only be operated locally directly on the winder, but their parameters can be viewed and adjusted centrally via the touch panel in the human machine interface (HMI) of the machine system.

“Operator friendliness, i.e. the simple and intuitive operation of the Labelmaster by the machine operator, has always been the focus of the further development of the Gallus Labelmaster,” the company said.

“In this regard the loading process of the substrate has also been redesigned and completely revised. With a new trolley system, i.e. a mobile lift outside the printing press, the substrate can be easily loaded and unloaded without touching the ground. An integrated lift is no longer necessary, and the operator can use the trolley flexibly as required, even on other machines. Simple and flexible loading of the substrate is the result.”

Gallus has also included further optimised features such as improved accessibility to the corona pre-treatment and web transport modules with a quick-change system for quick and easy cleaning to the Gallus Labelmaster.

“More than 160 installations of the Gallus Labelmaster worldwide speak for the success of this flexible machine system. The Labelmaster is now available with these new features, partly included in the package as standard or depending on the wishes and needs of the printing company,” the company said.