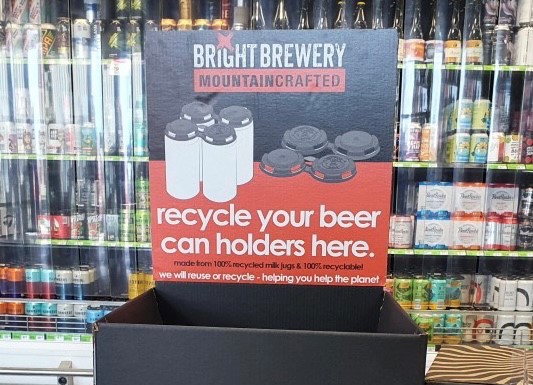 In what is believed to be a first in Australia’s craft beer industry, Bright Brewery has rolled out a recycling scheme for Paktech beer can handles in bottleshops and supermarkets.

Bright Brewery-branded Paktech recycling bins are being installed in independent bottleshops and supermarkets from this week.

Beer lovers can drop any plastic Paktech beer can handles into the bins – whether they’re from Bright beers or any other brewery – to ensure they’re recycled correctly.

“We believe this is the first recycling scheme of this kind in Australia,” Craney said. “We pride ourselves on acting sustainably in every aspect of our business, and this seemed like an obvious way to do that on a much bigger scale.

“We will collect all the handles, and make sure they are all are reused or properly recycled, as part of ongoing quest to lessen the environmental impact of craft beer.

“Most people don’t realise that they are actually made of recycled materials, and they are completely and infinitely recyclable. They are also really sturdy and re-usable, which makes them even more sustainable,” she said.

Craney also said the idea for the recycling scheme, like all great ideas, was concocted over a few cold beers, in order to solve a problem all beer-drinkers face.

“We have always recycled and reused our own Paktechs in-house. But we know that, anecdotally, many beer drinkers don’t even know they are recyclable and are just throwing them out,” Craney said.

The first bin was installed at Carwyn Cellars in Thornbury, Victoria earlier this week and general manager Ben Duval said he was thrilled to be involved.

“As soon as Bright came to me with the idea, I knew it was gold,” he said. “Beer drinkers never know what to do with the handles, and they just end up getting chucked out.

“Bright has solved a massive problem for us and for our customers, and I can’t believe no brewery has thought to do this before now!”

The bins are currently rolling out to Bright’s independent retail customers across Victoria, with other states to follow shortly.

Craney said Bright was hoping to implement the same program within the major national “big box” retailers to increase the awareness around sustainable practices in the craft beer industry and implement the program on a larger scale.

“We are hoping that the success of these in independent retailers helps translate over to the major chains as we continually develop new ways to lessen our carbon footprint,” Craney said.